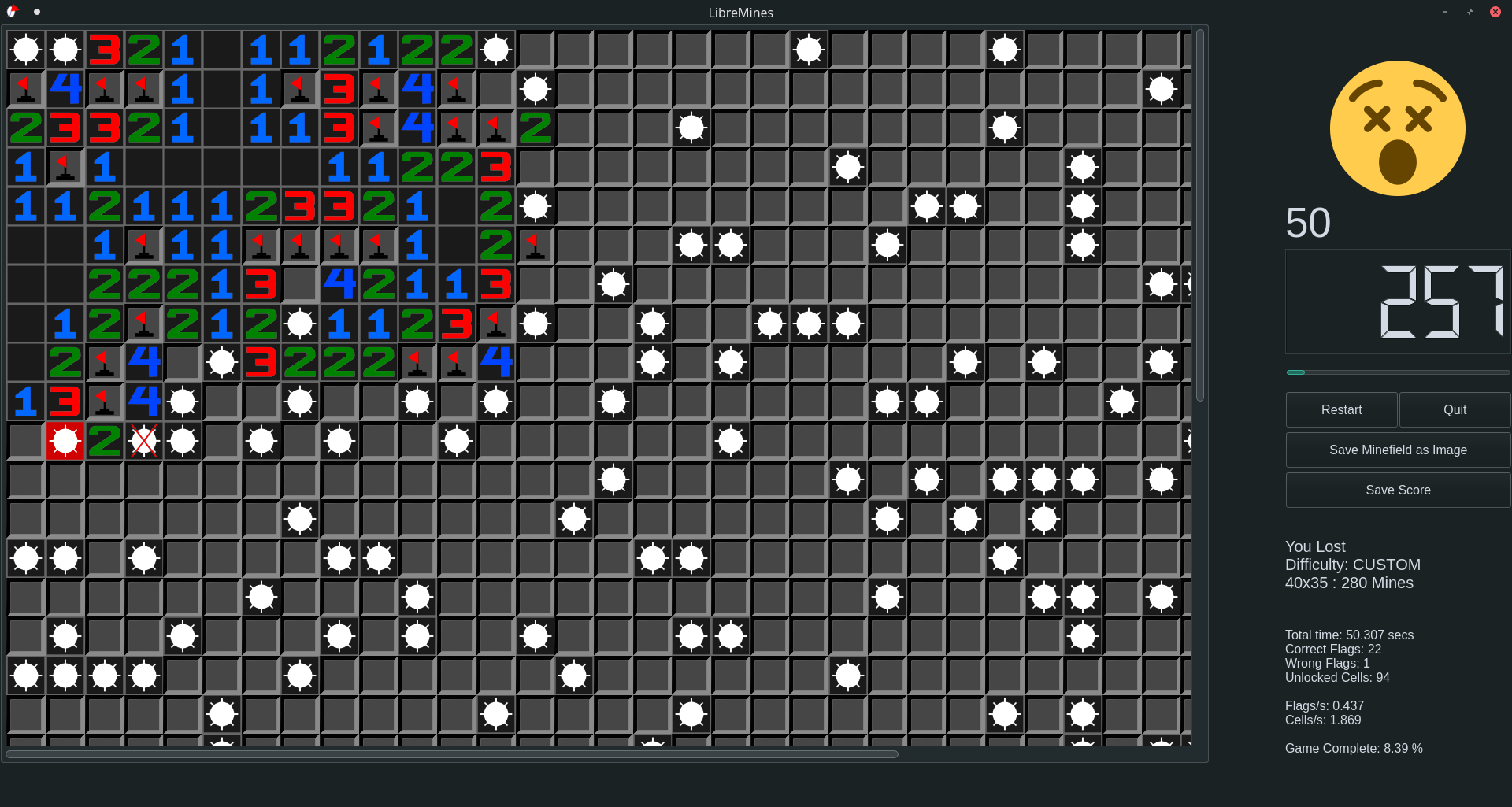 LibreMines is a Free/Libre and Open Source software Qt based Minesweeper clone available for GNU/Linux, FreeBSD and Windows systems.

The game has dark and light themes, is widely customizable, has options to create customizable fields, allows the user to play with the keyboard, among other things.

The source code is licensed under the GNU General Public License at version 3 (or any later version), this includes all files inside the src directory. The artworks are licensed under the Creative Commons Attribution-Share Alike 4.0 International, this includes all files on the share directory, except the files on share/application_stylesheets directory, which licenses are indicated with the LICENSE files inside subdirectories.

LibreMines is available on the Arch User Repository. With yay it can be installed with:

There is a package for LibreMines available on FlatHub. The package can be installed, via command line, with:

For windows systems, if you do not want to install LibreMines from the source code, you can just get one of the releases here. And follow those steps:

The executable libremines.exe will be inside the folder extracted. You can also add a Desktop shortcut or put it on the taskbar.

Installing from the source code

The following dependencies are required for building and running LibreMines:

On Arch Linux and derivatives systems, the dependencies can be installed with pacman:

For Ubuntu, you can install the dependencies with the following command:

On Fedora, install the dependencies with:

For others systems, check the qt online installers or your preferred package manager.

In order to build LibreMines from the source code, follow those steps:

You can also get a stable release from here.

Note that the option CMAKE_INSTALL_PREFIX determines the target directory of the installation. If you want to install LibreMines using Qt6 libraries, additionally pass the argument -DUSE_QT6="YES" on the fourth step (the cmake part). Also, in order to install alternative_dark and alternative_light minefield_themes, pass the argument -DINSTALL_EXTRA_MINEFIELD_THEMES="YES".

The executable libremines will be generated in the build directory, now it is possible to run it with:

Installing on the system (Unix only)

At least, if you want install LibreMines on your system, use the following command:

For uninstall LibreMines, on the build directory, run:

Or manually remove the files listed on install_manifest.txt.

When you initialize the application, you will face this screen: 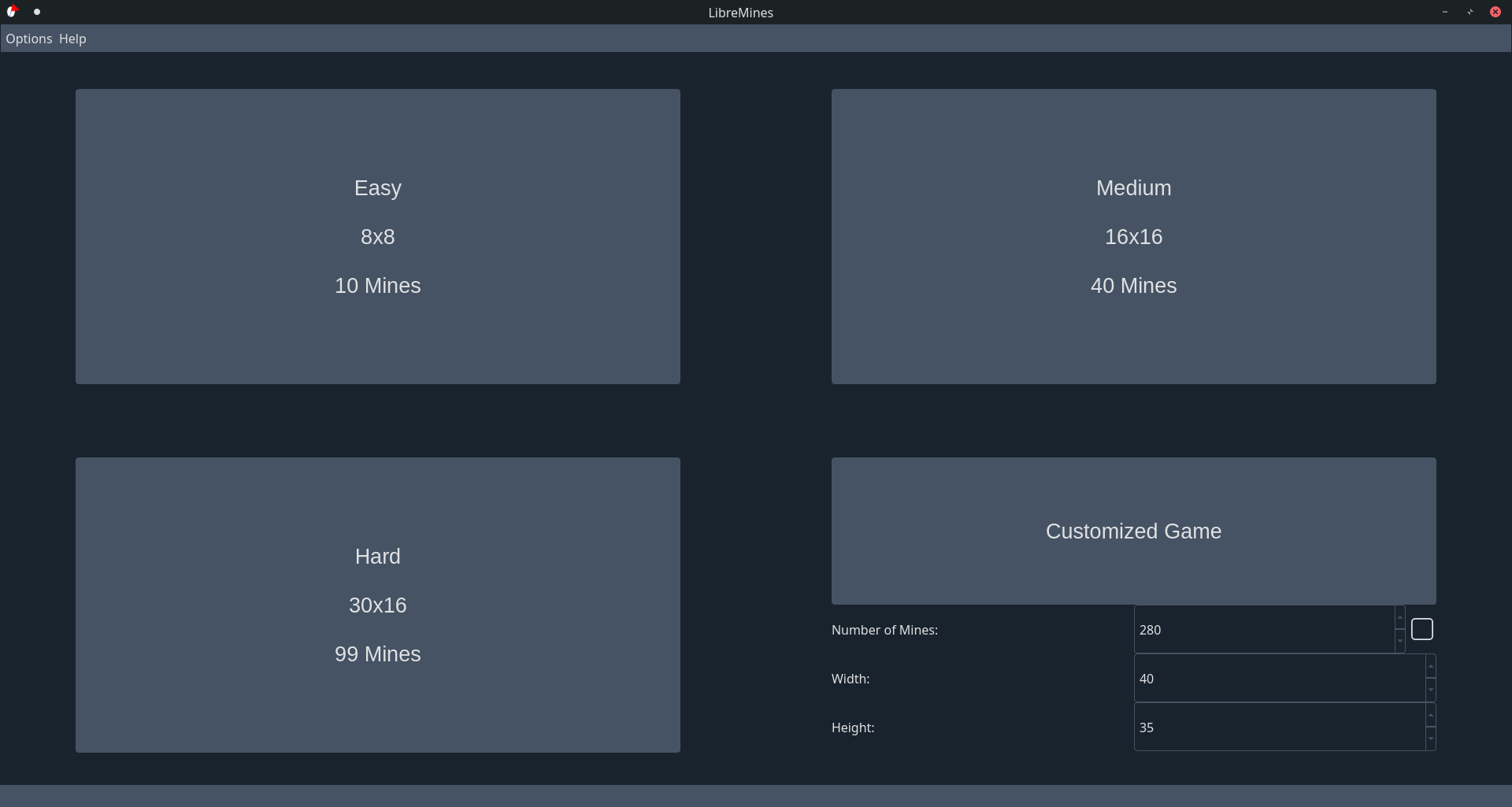 Here you can start to play one of the predefined game modes – easy, medium and hard –, or you can customize the field the way that you want to play. Select one of those options and you will be ready to start. (Note the options on the upper left of the screen).

You will start the timer of the new game when you release the first cell, you can play with your mouse or with your keyboard.

Playing with the mouse

Playing with the keyboard

If you do not feel comfortable with those keys, you can edit them going to the main menu, then Options > Preferences.

Tip: hold the CTRL modifier while moving in order to move faster.

All kinds of contributions are welcome on this project. You can help: